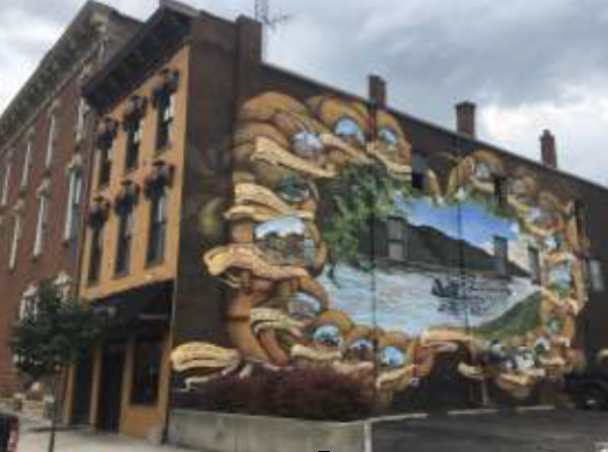 Wall murals have been used effectively in “Main Street” revitalization efforts for many years – and often in smaller historic cities (as shown).  As new urbanism spreads to the suburbs (and more retail areas are struggling to recover) such murals may now be considered to add interest for more conventional shopping areas.

But such dramatic installations can also be controversial or jarring to the community character.  Even an interesting new graphic can quickly become “dated.” And for towns which have architectural design review, oversized signage may be proposed as a low cost substitute for more appealing or functional architectural details, such as display windows.

Last but not least, regulation of the content for a space dedicated to artwork can become a legal and regulatory nightmare – especially under evolving constitutional standards and more recent US Supreme Court case law. As quoted above, thoughtful and thorough consideration can best balance these challenges and new opportunities!

In my hometown of Glenview, IL all these issues are being considered for Downtown redevelopment.  What do you think? John R. Hedrick is an attorney and consultant with a broad background in government and business regulation who currently focuses on community development and urban design issues.

For over twenty five years, John has represented corporations, nonprofits and local governments at the national, state and local levels.

Contact John as a consultant, or to speak at your next event: mdrn.consulting@me.com